Tonight Britain's longest running pop music show celebrates its 1,000th edition. Since its first transmission on 1 January 1964 Top of the Pops has provided a weekly programme reflecting the bands and artists in the current hit parade. Included in the programme are video clips and personalities from the past 19 years.But the emphasis will be, as always, on the top pop records from this week's chart. Top 40 on Ceefax page 176 For the best effect, viewers with stereo Radio 1 should turn off TV sound and position their speakers on either side of the screen, but a few feet away. Stereo headphones are an alternative. 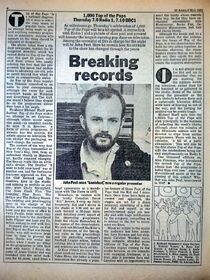 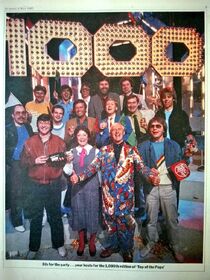 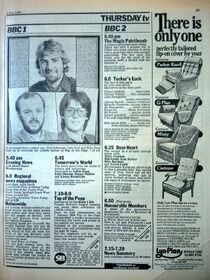 Add a photo to this gallery
Retrieved from "https://pop-culture-scrapbook.fandom.com/wiki/05_May_1983?oldid=24565"
Community content is available under CC-BY-SA unless otherwise noted.