Blancmange are a British synthpop group who became famous with a number of hit singles from 1982 to 1984. Among their best known songs are 'Living on the Ceiling' and a cover version of the [[1]] song 'The Day Before You Came'. The duo of Neil Arthur and Stephen Lascombe released three albums between 1982 and 1985 before splitting up. Arthur has since returned to the music scene under the Blancmange name and continues to record and play live.

In 2017 the back catalogue of their first three albums Happy Families (1982), Mange Tout (1984) and believe You Me (1985) we re-issued with accompanying material relative to each period as a box set entitled The Blanc Tapes and separately in 3 Cd and media book packages. A brand new album Unfurnished Rooms is set for September 2017 release. 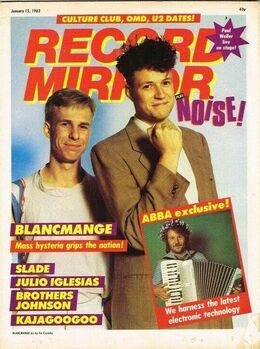