The Electric Light Orchestra (or ELO) are a British rock/pop band formed in Birmingham in 1970. The group was founded by Jeff Lynne and Roy Wood (both formerly of The Move) and drummer Bev Bevan. the group's music is characterised by the use of strings, woodwind and other classical instruments within the arrangement of the more traditional rock and pop songs.

Their eponymous debut album, written and produced by Wood and Lynne, was issued in December 1971 and made the lower reaches of the UK album charts, while the group's first single 10358 Overture, featured on the album, also became their first hit reaching no.9 in the UK in August of the following year.

Wood left the group during the recording of their second album, by which time the line-up had expanded to include Richard Tandy on bass, later changing to keyboards, plus three string (violin and cello) players. Two further albums, ELO 2 and On the Third Day, were issued in 1973, each with its own hit single, Roll Over Beethoven and Showdown respectively.

ELO's fourth album Eldorado: A Symphony by the Electric Light Orchestra (1974) saw Lynne incorporating a full orchestra and choir into the group's music. The album went gold in the US although popularity was waning in the UK, and both the album and single Can't Get It Out of My Head - top 10 in the US - failed to chart. 1975's Face the Music saw ELO gain further ground in the US and the first single Evil Woman also got them back in the Top 10 in the UK. In September 1976 the group released their sixth studio album A New World record which gradually saw them back in the album charts in their native country, thanks also to the hit singles Livin' Thing, Rockaria! and Telephone Line.

October 1977 saw the release of the Electric Light Orchestra's meisterwerk Out of the Blue, a double album written by Jeff Lynne allegedly within the space of three weeks. The album achieved worldwide success , spawning another four hit singles Turn to Stone, Sweet Talkin' Woman, Wild West Hero and their best-known song Mr Blue Sky, a five-minute track with a complex arrangement, originally the closing part of the album's 'Concerto for a Rainy Day' featured on side three. The album was accompanied by a nine-month, 92-date world tour with an elaborate stage set featuring the now famous ELO 'spaceship' as illustrated on the album cover.

With 1979's Discovery the group took a more pop-oriented direction while maintaining the eclectic mix of rock and classical instruments with arrangements augmented more and more by electronic effects. Worldwide chart success for the album was again aided by the release of five of the album's tarcks over foour hit singles. Shine a Little Love, The Diary of Horace Wimp, Don't Bring Me Down and the double 'A' side Confusion/Last Train to London. ELO's first greatest hits album was released at the end of the year, closing the decade and in time for the lucrative Christmas market.

In 1980 Lynne was invited to write the soundtrack to the upcoming US film Xanadu starring Olivia Newton-John. Eventually the soundtrack album proved more successful than the movie itself, spawning hit singles both for Newton-John and ELO (I'm Alive, All Over the World) and jointly with the title track becoming the group's first and only no.1 single in the UK.

1981's Time saw a return to the concept album (as with Eldorado) although with Lynne starting to adopt more sythesisers and electronic instruments as opposed to the real string and orchestral instruments, the group's sound mutated somewhat, possibly with a view to adapting to upcoming trends in new musical styles such as synth-pop. The gamle paid off with Time becoming a surprise UK no.1 album, featuring a further three hits - Hold On Tight, Twilight and Here is the News.

After a relatively lengthy hiatus, the 1983 single Rock and Roll is King bode well for the new album Secret Messages which enjoyed modest success but was to be ELO's last worldwide Top 40 album, although made no.4 in the UK. Lynne, Bevan and Tandy returned to the studio in 1985 to record Balance of Power, the last Electric Light orchestra album until 2001. 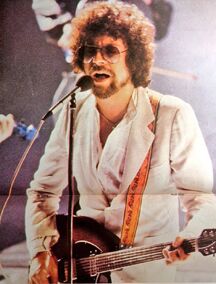 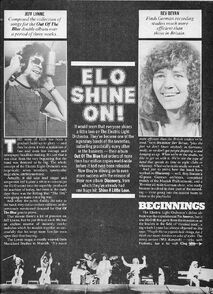 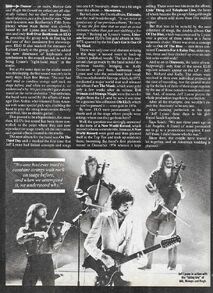 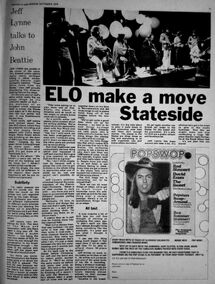