Janice Long (née Chegwin, b. 05 April 1955) is a British radio and occasional TV presenter. She made her BBC Radio 1 debut with her own Saturday evening show on 04 December 1982 [1] and her Top of the Pops debut two days earlier on 02 December, when she was introduced as the newcomer. At the time, together with Anne Nightingale she was one of only two female DJs on Radio 1. Hailing from Liverpool, Long had an ear for more alternative music, which she often featured on her programme, and struck up a solid working relationship and friendship with John Peel.

Long was brother to presenter and TV personality Keith Chegwin who died in 2017.

Long began her broadcasting career at BBC Radio Merseyside in 1979, on the children's programme Junior Spin. In 1981 she began the Streetlife programme concentrating on the local music scene, as well as producing and presenting other programmes such as And the Show Goes On, a documentary to celebrate the 70th anniversary of Liverpool Playhouse (see right).

On moving to BBC Radio 1 in late 1982, Long hosted the Saturday early evening (7.30) show, later moving on to a similar time slot on weekdays between 1984 and 1987, initially replacing Kid Jensen. Like Peel and Jensen, she often featured studio sessions by up and coming artists as well as by established bands on her shows, mixing in chat and current affairs. As part of the regular Radio 1 roster she also did the Radio 1 Roadshow, occasional holiday stand-ins and Top of the Pops presenter duties, often with Peel. She also presented documentary type radio series such as 'Who's that Girl', which focused on female artists in the pop and rock industry. She left to have her first child in 1987.

From 1989 she presented shows on other radio stations such as BBC London, BBC Radio 5 and BBC World Service. In 1995 she returned to Liverpool and set up her own radio station CrashFM.

In September 1999 she returned to the BBC, presenting her own show on Radio 2 on weekday nights at midnight, [2] before moving onto the afternoon Saturday Music Show from 08 January 2000 as well as the weekday afternoon slot in February and March, and returning again to the weekdays at midnight slot from 04 April for a long-running three-hour live show, often featuring live music sessions. The show was cut to two hours from January 2012, and then suddenly taken off the air at the beginning of 2017 when it was decided that Radio 2 would no longer do any live broadcasting after midnight. Long gave a teary farewell on her final show broadcast on 26 January 2017.[3]

On 22 May 2017 she began an early evening show on BBC Wales between 7.00 – 10.00 pm, Monday to Thursday. The show features live sessions and also provides a platform for Welsh artists. 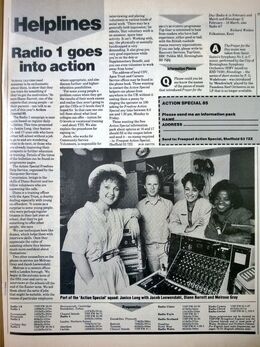 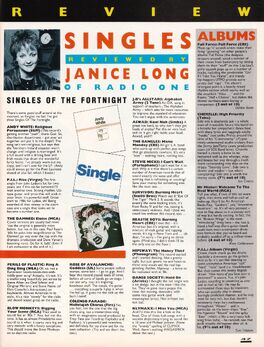 Retrieved from "https://pop-culture-scrapbook.fandom.com/wiki/Janice_Long?oldid=30260"
Community content is available under CC-BY-SA unless otherwise noted.