The group basically remained as core-members and song writing partners Paul Humphreys and Andy McCluskey (as pictured on the rear of the sleeve) although Malcolm Hilmes who had palyed on the first album and who had also been part of the live line-up is also credited on the album with 'drums and acoustic percussion'. Production is credited to Mike Howlett who had begun working with OMD earlier in t year producing a brand new version of Messages from the first album, which had become their first hit single.

Although much of the album had been written and demoed in the group's own Gramophone Suite studios in Liverpool, the group relocated to Ridge Farm studios in Surrey and Advision in London for recording and mixing. Only 2nd Thought was recorded at The Gramophone Suite.

Although all the tracks were brand new recordings, tracks such as The Misunderstanding and VCL XI dated back to the group's early days as The Id. Enola Gay and Motion & Heart had had their first outing, albeit in embryonic form, during the group's second Peel session recorded back in April. The tracks had not been completed in time to be included on the first album. They had also been played live prior to the release of the album.

Songwriting credits for each track are specified for the first time. Promise is the first OMD track to have been written by Humphreys alone.

A new version of Electricity was also recorded with Mike Howlett and was released on the DinDisc 1980 compilation album.[1] It remained exclusive to this release until being included on the 2003 CD remastered re-release of Organisation.

As with previous single and album releases, sleeve design for Organisation was handed to Factory records 'shareholder' Peter Saville. The front cover photograph depicts a view of the Cuillin hills on the Isle of Skye in Scotland. the photograph and grey/black colour scheme and typography reflect the overall dark mood of the album. In a 1980 interview McCluskey said that he had spent a lot of the summer driving around with Saville, listening to a cassette of the Factory album Closer by Joy Division, whose lead singer Ian Curtis had committed suicide in May. Closer had been released posthumously in July.

The grey cover was later replaced by a back version with white typography.

The success of the preceding single Enola Gay and of the debut album, still in the charts up until July, had created much anticipation for Organisation and consequently, the album entered the UK album charts at no.6 (the highest new entry) immediately after its release. The lack of a follow up single to Enola Gay from the album meant however that success was fairly short-lived and it remained in the Top 40 for six weeks.

Side One (added onto side two of the cassette)

- Introducing Radios / Distance Fades Between Us

Side Two (added onto side one of the cassette)

- Progress / Once When I Was Six 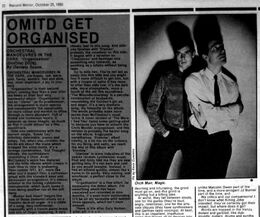 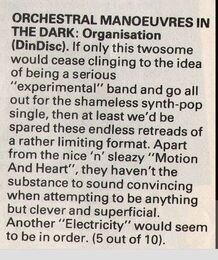 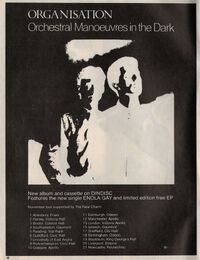 from Smash Hits
Add a photo to this gallery
Retrieved from "https://pop-culture-scrapbook.fandom.com/wiki/Organisation?oldid=13094"
Community content is available under CC-BY-SA unless otherwise noted.