Sleepwalk is the title of a song written and recorded by the British band Ultravox. It was the group's first release by the new line-up with Midge Ure as lead vocalist and 'frontman'. It was produced by the band and German Conny Plank, who had also worked on Ultravox's previous album Systems of Romance while John Foxx was still the frontman.

Previewed as part of the new line-up's live set on their US tour in late 1979[1], the song was released as a single on 16 June 1980 ahead of the album Vienna, released shortly afterwards. Although it was slow to chart, the single became the group's first commercial success, reaching no.29 in the UK singles charts on 12 August 1980.[2] Ultravox consequently appeared as the opening act on Top of the Pops on 14 August for a mimed performance of the song, although this did little to favour the single's success as it dropped one place the week after, returning to no.29 the week after that, spening a total of seven weeks in the Top 40. The parent album Vienna was, at the same time, in the UK Top 20 album charts (although would go on to have greater success in 1981 after the release of the title track as a single).[3]

Although Sleepwalk gained only modest success at the time, it remains one of the group's best known tracks and a staple of the 'new romantic' and 'electro-pop' genres and led the way for many other songs in the eighties which combined synthesisers with the more traditional drums and electric guitars.

The track is included on all of the group's hits/best of compilation albums. 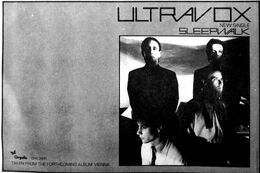 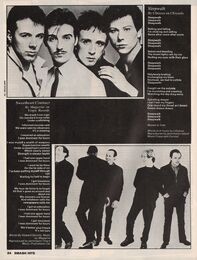 lyrics in Smash Hits, issue dtd. 07 August 1980
Add a photo to this gallery

Retrieved from "https://pop-culture-scrapbook.fandom.com/wiki/Sleepwalk?oldid=26938"
Community content is available under CC-BY-SA unless otherwise noted.