Initially a monthly, publishing lyrics to chart hits as well as features, interviews, singles and albums reviews, colour centrespread and full page posters, it soon became a fortnightly publication, appearing on Thursdays. The magazine featured an eclectic mix of pop, rock, new-wave, disco and even punk music in order to cater for all tastes in a time of rapidly changing musical styles.

First appearing in October 1978, Smash Hits was at its peak during much of the 1980s, always managing to move with the times and trends, despite competition in an evolving media market. Sales declined in the 1990s although the magazine still lasted until February 2006 when the final edition was published, 28 years after its debut.

Famous contributors in its early years include David Hepworth, Mark Ellen, both of whom became regular broadcasters and writers, and Neil Tennant who went on to form the Pet Shop Boys . 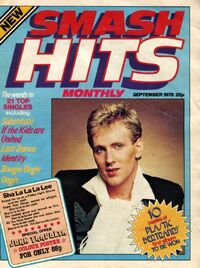 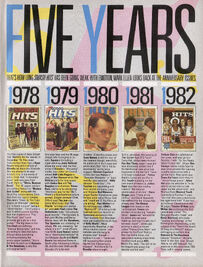 Retrieved from "https://pop-culture-scrapbook.fandom.com/wiki/Smash_Hits?oldid=25539"
Community content is available under CC-BY-SA unless otherwise noted.