Spandau Ballet were a British new wave pop group established in the London area in 1979. Starting out as a punk band under the name of The Makers in late 1976, friends and group member Tony Hadley, Steve Norman, John Keeble, and brothers Martin and and Gary Kemp, moved into creating a more power-pop sound under the name of Gentry before finally becoming Spandau Ballet and adopting more electronic elements into their music. The group soon become a regular live feature on the London club circuit, establishing a cult following as gigs were often secret or previously unannounced.

Their breakthrough came with their debut single To Cut a Long Story Short, a top 5 hit in late 1980, swiftly followed by two more top twenty hits, The Freeze and a remix of Musclebound and a successful debut album Journeys to Glory. The group became firmly associated with the New Romantic movement, thanks also to an original choice of clothing and image. Spandau Ballet adopted a funkier sound in the summer of 1981 with tracks like Chant No.1 (I Don’t Need This Pressure On) and Instinction, taken from the Diamond album, before becoming international pop stars from 1983 onwards with hits like True (the group's first and only no.1), Gold and Through the Barricades. At the height of their career they were often depicted as a 'rival' group to contemporaries Duran Duran. The two bands competed against each other on a special edition of Pop Quiz on (!).[1]

After a slow demise towards the end of the eighties, the group finally broke up in the early nineties after a disagreement over royalties. The non-Kemp menbers contunued to perform under the name of "Hadley, Norman and Keeble, ex-Spandau Ballet" in order to pay off legal fees. Each successively pursued solo projects in music and acting.

After much speculation over a possible re-pacification, on 21 March 2009, Radio 2 DJ Jonathan Ross announced that Spandau Ballwt were re-forming and that he had been invited to the reunion party. This was confirmed by the group themselves at a press conference on 25 March 2009, on board HMS Belfast in London. On 19 October 2009, the group released a new album, Once More, which featured reworked versions of previous hits plus two new songs. A tour ensued in 2010.

A documentary film directed by Julian Temple on the subject of the group entitled Soul Boys of the Western World was released in 2014, and another world tour followed the year after.

On 03 July 2017, Tony Hadley announced on Twitter that due to circumstances beyond his control, he was no longer a member of the band.[2] On 06 June 2018 the group played a live show with new vocalist Ross William Wild.

**including four weeks at no.1

Top of the Pops appearances 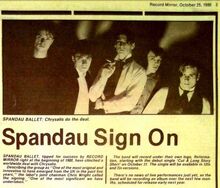 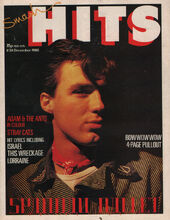 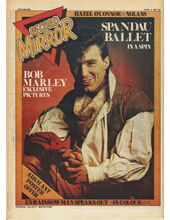 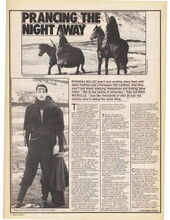 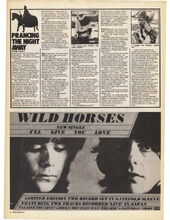 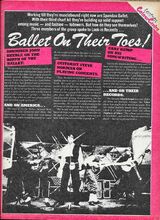 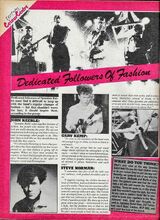 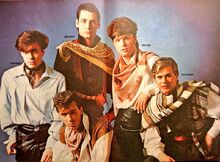 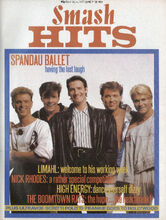 Retrieved from "https://pop-culture-scrapbook.fandom.com/wiki/Spandau_Ballet?oldid=38753"
Community content is available under CC-BY-SA unless otherwise noted.