Love On Your Side, We Are Detective, Hols Me Now, Doctor Doctor, Lay Your Hands On Me.

Quick Step & Side Kick, Into the Gap, Here's To Future Days

Thompson Twins were a British new wave and later electronic music pop group originally formed in 1977. The group underwent several line-up changes over the years. Originally a four-piece, they grew at one point a seven-piece band although remain best known for the trio of Tom Bailey, Alannah Currie and Joe Leeway who had several hits from 1983 onwards both in the UK and the US. Bailey has been the only constant member and still records under his name and occasionally performs live as "Thompson Twins' Tom Bailey."

Before becoming the well-known trio, the group's early recordings gained the attention of John Peel in 1980 and they recorded a session as a six-piece for Richard Skinner in February 1981.[1] The single In The Name of Love gained some play in the Radio 1 early evening shows but failed to chart. After the release of their album Set in early 1982 they sized down to the well-known three-piece.

Thompson Twins were one of the groups to lead the 'second British invasion' of the USA in the 1980s and in fact gained success in the USA with In The Name of Love even before becoming obtaining any commercial success in their native Britain.

They participated in the US half of the Live Aid concert on 13 July 1985 and were joined onstage by Madonna, Nile Rodgers & Steve Stevens for a performance of The Beatles' Revolution, which they later released as a single.

UK singles and albums only

Top of the Pops

Studio performances or full videos only. Chart placing in brackets 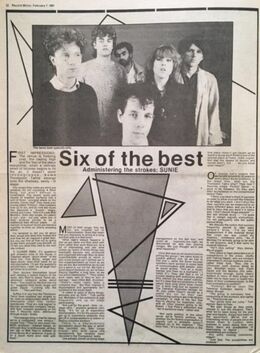 Record Mirror', February 1981
Add a photo to this gallery

Retrieved from "https://pop-culture-scrapbook.fandom.com/wiki/Thompson_Twins?oldid=31278"
Community content is available under CC-BY-SA unless otherwise noted.